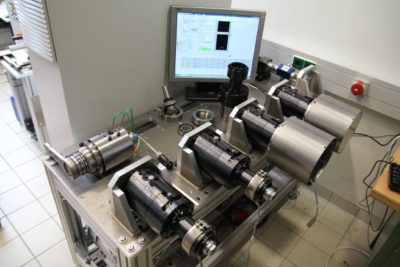 In an endurance test, lubricating grease in rolling bearings is subjected to mechanical-dynamic loading under laboratory conditions in order to obtain data for the development of a screening test method. Photo: Competence Center Tribology

An important step on the way to elucidating the causes of a reduction in the lubricity of lubricating greases in rolling bearings has been taken by the Competence Centre Tribology Mannheim and the Oel-Waerme-Institut in a joint research project. Thermogravimetric analysis (TGA) was used to identify a test method that can be used for the development of lubricating greases. The TGA made it possible to differentiate quickly and cost-effectively between the greases used depending on the load and the load time. In combination with the experience gained from the numerous rolling bearing tests on the multi-station rolling bearing test bench, the simple TGA test can be used to make statements about the behaviour of the greases in the bearing.

The development of lubricating greases is a technically and time-consuming process. Typically, several iterative development cycles with repeated stability tests are necessary, which increase the costs with each cycle. The innovative evaluation methodology based on the TGA could become interesting for small and medium-sized companies in grease development in the future, but could also be used by analysis laboratories and service providers.

Rolling bearings are used universally throughout mechanical engineering and are indispensable for modern drive technologies. The prediction of the grease operating life in grease-lubricated rolling bearings is of great importance for manufacturers because it often depends on the grease operating life if “relubrication” is not possible or planned. This is associated with a high cost risk, because the failure of a rolling bearing could lead to the total loss of a complete technical system.

The investigations of lubricating greases within the research project led to the new insight that thermal oxidation does not seem to be mainly responsible for the degradation of lubricating greases, but that the degradation of thickeners in the lubricating grease could play an important role. As the grease ages, the thickener’s ability to bind the oil contained in the grease initially diminishes prematurely. Due to the oil loss in the grease, the rolling bearing loses its lubrication with the consequence of a functional failure and possible system malfunctions. These relationships will be further investigated in a follow-up project.

The results of the research project have been published in DGMK Research Report 788.

The IGF project 18615 N of the research association German Society for Petroleum and Coal Science and Technology e.V. – DGMK, Überseering 40, 22297 Hamburg is funded through the AiF as part of the program for promoting joint industrial research (IGF) by the german federal ministry of economics and energy based on a German Federal Parliament resolution.