Power and Heat for Houses and Apartments 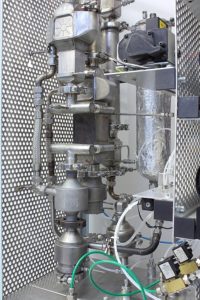 Fuel cell systems can also be used for the supply of buildings with domestic heat and power. Due to the fact that a supply infrastructure for hydrogen is not within sight in the foreseeable future, most device developers are interested in the approach of producing hydrogen as a syngas from a common energy carrier that is gaseous or liquid. Few manufacturers already offer corresponding devices based on natural gas. OWI is engaged in fuel cell systems that use liquid energy carriers, usually fuel oil.

The advantages of fuel cell systems in domestic heating systems are

In this context OWI researches and develops all system components, from the fuel gas production to blowers, pumps and the tank to residual gas combustion. The only exception: the fuel cell itself as a system component for the respective application is chosen from the offers that are available on the market. The system control and regulation is also developed at OWI. The design of the systems can either be heat or power driven depending on the demand and purpose. The main development objectives are e.g. the optimisation of the durability and costs of the systems. Depending on the purpose and power demand the combination with other technologies, such as solar heat, thermal and electric storage systems, can be useful. In this context, OWI also works on the evaluation of technologies and systems with regard to energetically, economically and ecologically useful applications.

An example of our work:

In order to achieve a higher electrical efficiency than conventional motor-driven BHKW´s, the use of fuel cells for larger CHP plants is also possible. This can be achieved, for example, with a modular approach in which several small fuel cell modules are coupled to form a large plant. As part of the European research project CISTEM, the operation of this concept was demonstrated in a new combined heat and power plant (CHP). The central idea of the project is to make high-temperature polymer electrolyte membrane (HT-PEM) fuel cell technology usable as a CHP concept for applications up to 100 kW electrical power. The technology was not yet available in this power range and therefore required a new development for the special requirements with regard to efficiency, costs and service life of the fuel cells. The concept envisages that ideally regeneratively produced hydrogen from wind power will be used to operate the fuel cells. Natural gas is available as backup energy carrier, which can be converted into hydrogen by a fuel gas generator module integrated in the system. 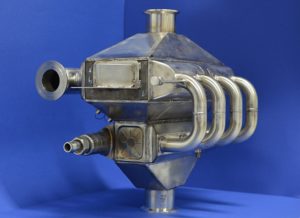 By increasing the electrical efficiency, CHP operation not only gains more flexibility through longer running times into the summer, but also significantly higher economic efficiency, as the increased amount of electricity can be fed into the grid. With OWI’s reform gas engine technology and intelligent control and regulation techniques, CHP plants can provide heat and electricity even more efficiently.

At OWI, reformer units are not only developed for the production of fuel gas (hydrogen) for fuel cells for different types of reforming. Reforming processes can also be used to improve the electrical efficiency of internal combustion engines. They are based on fossil fuels, but can also be operated partly or completely with biogenic fuels. The concept envisages, for example, that a reformer unit is integrated into a CHP unit and coupled to the gas engine. Excess heat from the gas engine, which is normally dissipated unused into the environment, is conducted through the reformer unit together with part of the gas (natural gas or biogas). This produces a hydrogen-containing fuel gas with a higher energy content (calorific value) than natural gas or biogas, because some of the excess heat is chemically bound in the fuel gas. The synthesis gas produced in this way is then mixed again with the natural gas or biogas and fed to the engine. The additional energy provides for a higher motor power, which in turn is converted into a plus in electrical current in the generator. The recovery of the heat energy thus leads to a higher electrical efficiency of the system. Another engine application for reforming processes is exhaust gas aftertreatment. The admixture of hydrogen in the exhaust system of internal combustion engines can be used to optimize the catalytic processes of exhaust aftertreatment and thus reduce pollutant emissions. 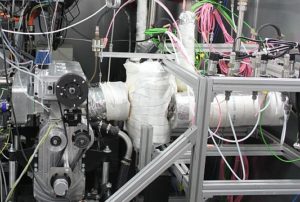 The reformate gas engine during testing operation in a test bench. Photo: OWI

Small combined heat and power plants (CHP) in the output range of 50 kW could be operated much more economically in the future and provide more energy according to demand. This is made possible by the reformer technology of the OWI, which produces a higher-quality fuel gas from natural gas and water vapour parallel to the operation of the combustion engine and conducts it directly into the engine. The principle originates from the steam reforming of diesel and was transferred to the reforming gas engine. This reduces fuel consumption and significantly increases the electrical efficiency of the system. The key feature of the reform gas engine concept is that no additional external auxiliary energy is required, since the heat required for reforming is extracted from the hot engine exhaust gas. Proof that the system works was provided in a research project.

A current research project plans to further develop the concept of the reform gas engine for the use of biogas (link to press release) instead of natural gas. The aim is to increase the electrical energy output of a CHP biogas engine by 10 to 15 % while simultaneously reducing the thermal energy output. Since reforming is in principle also technically possible with carbon dioxide (CO2), the CO2 content of around 30 to 40% in biogas is intended to replace the use of water in whole or in part. Without the water previously required for steam reforming, the complexity of the entire system and thus the subsequent production costs would be reduced.