Auxiliary Power Units (APU) are used for power generation in mobile applications independently of the drive unit. In this way, on-board equipment can be run with the required power during idling or rest time. Fields of application are in airplanes, on maritime vessels, in trucks, but also in leisure sectors, such as camping (motorhomes, caravans) or on yachts.

OWI is concerned with the technical advancements of APUs based on fuel cell systems that are run by the fuel in the main drive or by further fuels, such as methanol, and are carried along in separate tanks. The aim is to increase their efficiency and service life as well as to reduce pollutant emissions. At the same time, power supply is to be ensured constantly and preferably permanently.

In the USA fuel cell apu´s have good market opportunities because of the anti-idling laws that prohibit power generation by the truck engine. Photo: iStock.com / rpernell

Due to stricter environmental constraints by the legislators, new markets for manufacturers of systems for portable power generation (APU – Auxiliary Power Unit) arise worldwide, as for example in the USA due to the “Anti-idling”-legislation. So far American trucks were able to receive their power supply for air-conditioning and other technical devices from power generators or running motors, even during their standing time. By legally prohibiting this common practice, the consequences, such as pollutant and sound emissions, are to be reduced.

Integrated fuel cells on board offer a solution for low-emission and quiet power supply of trucks without running motors. They work on the basis of the diesel fuel that is located on board and convert it into a fuel gas by reforming which again is converted into electrical energy in a fuel cell.

Technical background on the system 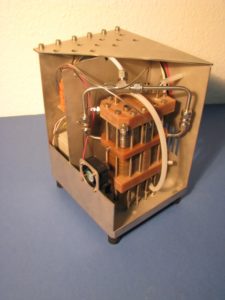 For some time, a network-independent power supply by means of cell systems for devices with low to middle electrical power consumption has been researched. The supply, for instance, of notebooks or bicycles, should function stably and be small, portable, affordable and, thus, marketable. Power generators on the basis of petrol and diesel engines are the current technology for power generation for the operation of technical devices with middle power consumption. Their disadvantages are a relatively low efficiency as well as high sound and pollutant emissions. This constrains their use in leisure applications.

One of the promising approaches for the avoidance of these disadvantages is to generate power from logistical fuels with independent, compact, efficient fuel cell systems and reformer-combi-systems. At OWI, one researches and develops portable fuel cell systems with an electrical power of 50 Wel to 3 kWel. The systems generate on the basis of diesel fuel or regenerative producible methanol a fuel gas which can be converted in to electrical energy by the fuel cell. The system development incorporates the fuel gas generator, the best suitable fuel cell depending on the application (LT-PEM, HT-PEM, SOFC), a battery as temporary storage and a selection of Balance of Plant-Components (BoP), such as blowers, pumps, control electronics and an air conditioning compressor.

Marketable systems in the leisure field must be cost-optimised with regard to their production and their later operation. In cooperation with industry partners and research institutions, OWI develops fuel cells up to their technical maturity in projects, such as MÖWE III or Micro-Fuel Cell and Methanol-Reformat.