19 August 2020 – A relative increase in the electrical efficiency of biogas-operated combined heat and power (CHP) plants by 7% is possible by using a modified gas engine. This is the central result of a research project in which the project partners ECC Automotive GmbH, OWI Science for Fuels gGmbH and the Chair of Technical Thermodynamics at the University of Siegen have modified a gas engine for hydrogen-containing fuel gases and supplemented it with a novel reformer module and successfully operated it with biogas model gases.

Combined heat and power plants with gas engines convert regeneratively produced biogas into electricity and heat and feed it into electricity or local heating networks. For technical reasons, more heat is generated in this process than electricity. In order to increase the share of electricity conversion of CHPs, the research project “Reform gas engine” aimed at increasing the electrical efficiency. This was achieved by recovering energy from the engine exhaust gas. In terms of process technology, the exhaust gas heat utilisation was achieved by thermochemical recuperation, which generates a hydrogen-containing synthesis gas from a biogas with a variable carbon dioxide content. 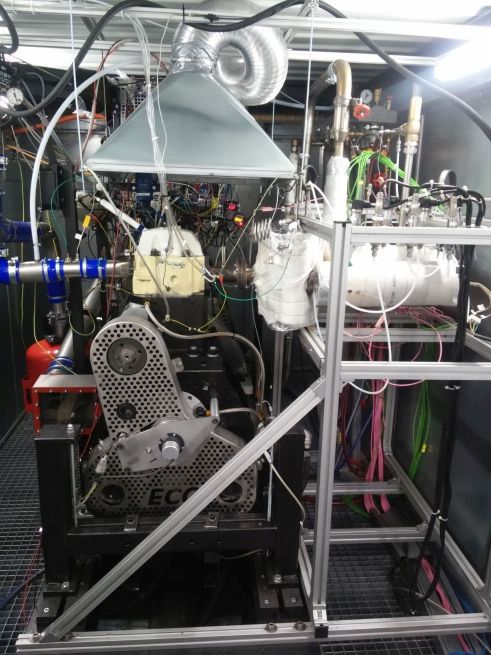 The reform gas engine on the test bench. Photo: ECC

For this purpose, a laboratory system was set up in the project, in which an internal combustion engine optimised for this purpose was coupled with a reformer module with a fuel output of 40 kW. Excess heat from the gas engine, which normally escapes unused into the environment, was transferred to the biogas-water vapour mixture in the reformer unit. This produced a hydrogen-containing fuel gas with a higher energy content (calorific value) than biogas, because the excess heat was partially chemically bound in the fuel gas. The synthesis gas thus produced was then fed back into the engine. This enabled a higher yield of mechanical and electric power. The recovery of thermal energy thus led to a higher electrical efficiency of the system.

Up to 12 % of the exhaust gas energy could be chemically bound by the reforming process. The decisive factor here was the exhaust gas temperature. Regardless of the biogas composition, exhaust gas temperatures above 700 °C resulted in recuperation rates of over 10 %. This corresponds to an increase in the calorific value of the fuel gas of 10 %. The effective mechanical efficiency of the system could be increased to up to 43 %, depending on the operating point of the engine.

In a forerunner project, the increase in electrical system efficiency by integrating the reformer unit into the power plant with methane as fuel has already been successfully demonstrated. In the course of the project, the intake manifold concept, mixture formation and combustion were revised on the engine side for operation with biogas. Another technical innovation was the soot-free reforming of gas mixtures containing up to 50 % carbon dioxide (CO2).

For CHP operation, the integration of the reformer technology not only means more flexibility due to longer running times until into the summer, but also significantly higher economic efficiency in line with the increase in electrical system efficiency. With the reformer gas engine technology and intelligent control and regulation technologies, CHPs could provide heat and power even more in line with demand.

However, there are still technical challenges that need to be solved before the reform gas module can be launched on the market. The biggest hurdle is currently still the greatly reduced service life of the reformer due to sulphur-containing compounds in the biogas. In order to circumvent the equipment and costs of fine desulphurisation, OWI and its partners are developing a regeneration strategy for the reformer as part of the current research project “Development of a thermochemical recuperator”. This also includes the demonstration of a reformer scaled up to 150 kW in coupled operation with a CHP.

The research project is supported by grants from the state of North Rhine-Westphalia using resources from the European Regional Development Fund (ERDF) “Investment in growth and employment”.