Innovation push for the SOFC fuel cell at sea

10 June 2022 – The MultiSchiBZ research project has been successfully completed with a innovation boost for the use of fuel cells in maritime shipping. Over the past two years, OWI Science for Fuels gGmbH has built and operated a solid oxide fuel cell (SOFC) system in the laboratory. It is designed for the production of on-board power for ship operation at sea and in berth operation in ports. The system is designed to convert liquid fuels available on board into a hydrogen-rich fuel gas, which SOFC fuel cells convert into electrical energy. System operation is low in CO2 and pollutants, as well as quiet and virtually vibration-free. 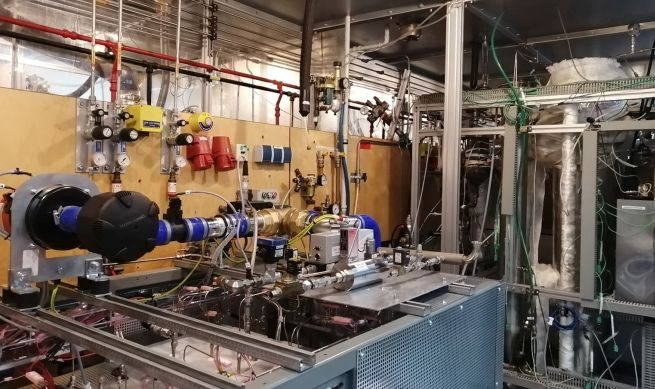 Prototypes of novel SOFC fuel cell modules with a total output of 25 kWel are used to set up the demonstrators in laboratory operation. These are integrated into an overall system consisting of a process gas module, an afterburner for hot exhaust gas and a DC-AC converter. The process gas module converts liquid fuel into a hydrogen-rich fuel gas to operate the fuel cell module. During the tests on the overall system demonstrator, the researchers evaluated the operating points, load changes and starting behavior. The emission values are significantly lower than those of conventional engine units.

The development of the process gas module took a major step toward technological maturity. A central element of the module is the catalytic converter installed in it, whose service life has a major influence on the economy of the overall system. With optimized process strategies, for example with regard to the temperature and mixing ratio of water, as well as the combination with sulfur-free synthetic and biogenic fuels, an increased catalyst service life of more than 10,000 h can be realized. This means that economical maintenance concepts are also achievable. In addition, it has been possible to close the system’s process water balance by condensing the water and treating it for use in the cycle.

The hot residual anode gas from the fuel cells remains in the system for further use. Part of the residual gas is converted to thermal energy in the afterburner, which is then used to provide the process steam in the steam reforming unit via a high-temperature heat exchanger. To utilize the remaining residual gas portion, OWI has developed a completely new technology: passive anode gas recirculation. As a result, hydrogen-containing portions of the residual gas remain in the system and can be further utilized. Residual gas recirculation with hot gas blowers is the state of the art in SOFC fuel cell systems, but they are expensive, prone to failure and reduce overall system efficiency. Passive anode gas recirculation serves the same purpose as a blower, but works by propelling a jet of hot steam. OWI developed the component using numerical simulations (CFD). It was manufactured using the 3D metal-printing process, which enables the production of compact apparatus that take up significantly less space in the system. Material tests conducted by OWI confirm the comparability of additive manufacturing with conventionally manufactured components. A proof of concept demonstrates the functionality of recirculation for all operating points, startup and load cycling.

MultiSchIBZ was one of the lighthouse projects of the e4ships research cluster for sustainable shipping of the future. The key to the success of the project was process knowledge of the complex systems as well as smart manufacturing processes for compact components with high power density. Upscaling of the laboratory demonstrator for the implementation of a larger overall system demonstrator with an output of 300 kWel has already taken place. Its implementation is the goal of an intended follow-up project. The partners of the MultiSchIBZ consortium led by OWI Science for Fuels gGmbH were DNV, Hülsenbusch Apparatebau, Institute of Thermodynamics at Leibniz University Hannover, Institute of Electrical Energy Systems at Leibniz University Hannover, Rosswag Engineering, Sunfire, Tec4Fuels and the Center for Fuel Cell Technology.

MultiSchIBZ was funded by the German Federal Ministry of Digital Affairs and Transport within the framework of the National Hydrogen and Fuel Cell Technology Innovation Program with a total of 7,163,422 euros. The funding guideline is coordinated by NOW GmbH and implemented by Project Management Jülich (PtJ).