Efficient use of industrial waste heat 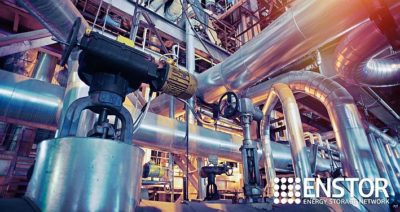 A modular heat accumulator is being developed for the use of industrial waste heat. Photo: Steinbeis-Innovationszentrum Innovations- und Wissensstrategien / ENSTOR: Energy Storage Network

9 July 2018 – Industrial waste heat is a by-product of many industrial processes and is currently often released into the environment unused. This applies in particular to high-temperature processes with process temperatures of more than 1,000 °C. The costs and CO2 emissions associated with the provision of energy represent a major burden for companies and the environment. In industry, the waste heat is already frequently used for heating other processes and for generating electricity or compressed air through direct recoupling. However, in many processes there is a time lag between the availability of waste heat and the demand for heat or electrical energy.

With the “ModulHeatStore” cooperation project, several research partners have set themselves the goal of developing and testing a modular heat storage system with an intelligent thermal process control system for the energetic utilisation of industrial waste heat for temperatures of more than 1,000 °C. The companies involved in the research project are Hülsenbusch Apparatebau GmbH & Co. KG, GIWEP Gesellschaft für industrielle Wärme, Energie- und Prozesstechnik mbH, OWI gGmbH and the Fraunhofer Institute for Manufacturing Technology and Advanced Materials IFAM, Dresden branch. The project partners are developing a modular heat storage system with different temperature levels and storage materials as well as an intelligent process control system to provide heat and electricity flexibly and in line with requirements. This offers an efficient and economical way to store and release industrial waste heat even at temperatures above 1,000 °C in a targeted manner. With the planned storage development, the amount of waste heat can be used independently of time, thus increasing the efficiency of downstream processes in manufacturing companies in order to achieve greater profitability.

The OWI’s tasks in the project include setting up and testing the storage system. The OWI has a pilot plant for imaging thermal sources and sinks up to 200 kW. In addition, the OWI is developing a test procedure for the use of thermal oils. The aim is to optimize the use of the oil with regard to ageing. Another important research result is the provision of a design tool for the storage concept developed. It should support the planner in the design, dimensioning and operation of the concept.

The idea for the “ModulHeatStore” project was developed as part of the ENSTOR: Energy Storage Network technology network. Network management has taken over the Steinbeis-Innovationszentrum “Innovations- und Wissensstrategien”.

The research project 16KN061424 is funded by the German Federal Ministry of Economics and Energy within the framework of the Zentralen Innovationsprogramms Mittelstand (ZIM) (Central Innovation Programme for SMEs) on the basis of a resolution of the German Bundestag.