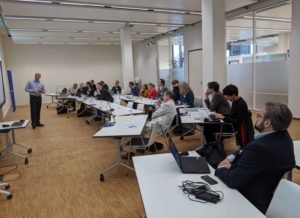 In a public workshop held in mid-December 2019, the partners in the EU research project “Residue2Heat”, including the Oel-Waerme-Institute, presented the results of their research and development work. The aim of the project was to use different types of biomass residues for domestic heat production. The biomass residues are converted into fast pyrolysis bio-oil (FPBO), which is a 2nd generation biogenic fuel suitable for combustion in domestic heating systems. When FPBO is used, depending on the raw material used, between 77 and 95% lower greenhouse gas emissions can be expected compared to conventional fuel oil.

According to the researchers, the use of FPBO to generate domestic heat is feasible in principle from a technical, environmental and socio-economic point of view. The production of FPBO is also possible in small plants with a processing capacity of 20,000 to 40,000 tons of biomass per year. Suitable raw materials for production are agricultural and forestry biomass residues, such as wood residues, miscanthus, straw or grass clippings, which are not suitable for food or feed production and do not lead to changes in land use. The ash produced as a by-product of the fast pyrolysis process is suitable as a fertilizer in agriculture due to its high mineral content.

In the production process, a largely homogeneous FPBO was produced, which made it possible to operate a conventional oil heating system over a longer period of time. A specially developed household burner with a thermal output of 16 kWth to 20 kWth ran just as reliably under laboratory conditions with FPBO as an adapted, commercially available condensing boiler with 34 kWth to 44 kWth. Due to the chemical-physical properties of FPBO, in particular its high viscosity and high acid content, the storage tank must be made of special high-density polyethylene, and all fuel-carrying components such as valves, pumps or nozzles must be made of stainless steel. Since the use of FPBO produces longer flames than conventional fuel oil, an adapted design of commercially available combustion chambers could open up further efficiency potentials in the future. In the course of development work, it was found that adding up to 20% ethanol to FPBO increases the ignition capability and reduces the viscosity of the fuel, thus facilitating burner start-up and minimizing the formation of deposits on burner components.

The results with regard to emissions were mixed. Carbon monoxide (CO) emissions are comparable with fuel oil burners, with less than 20 ppm at 3% residual oxygen content in the exhaust gas. The nitrogen oxide (NOx) emissions vary depending on the nitrogen content of the raw material used to manufacture the FPBO. While the NOx emissions of FPBO made from pine wood are comparable with fuel oil burners, they are at a significantly higher level for biogenic residues from forests and straw, which should be reduced in the future by further measures such as an air staging concept. As with pellet heaters, the fine dust particles produced during combustion must be removed from the exhaust gas by means of appropriate filters.

The EU research project “SmartCHP”, which was launched in June 2019 as the successor to Residue2Heat, is dealing with the remaining challenges for the use of FPBO in the domestic heating market. SmartCHP is developing a novel small combined heat and power (CHP) engine that uses FPBO to generate heat and power and could incorporate renewable energies into the heating and cooling sector. Improvements in pollutant emissions through exhaust aftertreatment and standardisation issues are key elements of the research and development work in this project.

The EU research project “Residue2Heat” is funded by the European Union within the framework of the Horizon 2020 research and innovation programme under the reference number 654650.

The EU research project Residue2Heat combines the development of production technologies for the manufacture of renewable fuels with the development of heating systems for the space heating market. The project consortium consists of three universities, three research institutes and three small and medium-sized enterprises from five different countries.