14 December 2020 – A new low-cost rapid test allows manufacturers of fuel-bearing components for heating systems and vehicles to test the resistance to fuels and combustibles of the used metallic materials. The test is suitable for middle distillates and mixtures of middle distillate and paraffinic hydrocarbons, each containing up to 20% fatty acid methyl ester (FAME). It detects the effects on materials caused by the aging of these fuels. The rapid test was developed by OWI Science for Fuels gGmbH in cooperation with the Bundesanstalt für Materialforschung und -prüfung (BAM) in a research project of the German Society for Petroleum and Coal Science and Technology – DGMK. 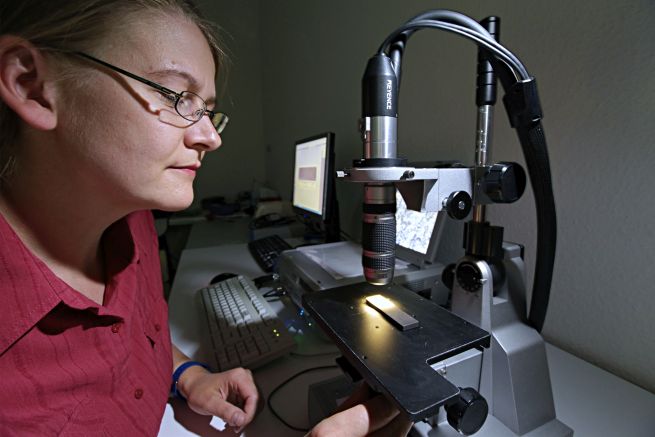 Investigation of a material sample with a digital microscope in the laboratory of OWI. Photo: OWI

The test method is based on the immersion of materials in two test media developed for this purpose. These are a mixture of 80 % EL low-sulfur heating oil with 20 % FAME (B20) and another mixture of 40 % EL low-sulfur heating oil with 40 % hydrogenated vegetable oil and 20 % FAME. Water and carboxylic acids are added to both test media to simulate a possible aging of the fuel after a storage period of 2 to 6 years. The test conditions are a storage temperature of 50 °C over a period of 28 to 50 days.

In addition to metallic materials, polymer materials used in supply systems for liquid fuels were subject of investigations in the research project. BAM immersed polymers in unaged and a 1-year aged B20, pure EL low sulfur fuel oil, pure HVO and pure FAME. As an extreme case, testing was also conducted in an 8-year-old B10. The resistance evaluations of these tests at BAM were documented in resistance lists. The ratings obtained with B20 generally apply to mixtures of EL low sulfur fuel oil with a FAME content of 20%. They are transferable to mixtures of diesel fuel with a FAME content of 20 %.

With an increasing use of heating oil and diesel fuels with biogenic contents, the forced test can provide answers to questions about the resistance of the materials of safety-relevant commercial components of utility plants, such as tank and sealing materials. Component manufacturers can use this test method to determine – in a short time and with conservative results – the compatibility between the material used in a component and alternative fuels and combustibles that had been stored for a long time. The low cost makes the method interesting for small and medium-sized companies with existing products and in product development. It can, for example, increase the certainty that components will pass the approval tests of the German building inspectorate. The findings of the research project can be incorporated into a harmonized European standard for alternative fuels.

The IGF project 19687 N of the research association German Society for Petroleum and Coal Science and Technology e.V. – DGMK, Überseering 40, 22297 Hamburg was funded through the AiF as part of the program for promoting joint industrial research (IGF) by the German Federal Ministry of Economics and Energy based on a German Federal Parliament resolution.

The final report of the research project is available for download on the website www.dgmk.de (only in german)